After my testimony at the U.S. House of Congress I have received mixed feedback, most of it good and constructive. Thank you. There is also a concern among others on my position regarding sanctions.

It is important to reiterate that as a scholar I am well aware of the challenges with sanctions and I do not think that broad-based sanctions on poor countries like Zimbabwe are effective. In my written statement I wrote:

“In 2001, the United States Congress passed the Zimbabwe Democracy and Economic Recovery Act (ZIDERA),[1] commonly referred to as sanctions in Zimbabwe. Mugabe and his government blamed many of the countries’ economic woes on these sanctions. Debates on sanctions are complex, and there is a lot of academic evidence that suggests sanctions negatively affect the poorest and most vulnerable. At the same time, targeted sanctions also constrain the behavior of rogue politicians who would otherwise have free access to resources (world class universities, shopping, properties, functioning banks) around the world while denying their own citizens the same opportunities.”

In the Zimbabwean case I recommended that the United States reconsider removing sanctions on state owned enterprises. I wrote:

“With regards to individuals and government institutions under the targeted sanctions list, the post-Mugabe era provides new opportunities for engagement between Zimbabwe and the United States. I recommend that the United States reconsider sanctions on state owned businesses. I recognize that the United States has long been concerned with the link between ZANU PF and state enterprises. Indeed, much of the corruption I discussed earlier has occurred in state owned businesses. However, it is my expert opinion that in the post-Mugabe era parliament has been bolstered in their independence and are better equipped hold government officials to account. I would like to draw attention to those parastatals engaged in agriculture and mining industries. Most small holder farmers depend heavily on funding from the state funded agriculture bank which in turn depends on support from big financial institutions.

State owned and other enterprises under targeted sanctions include (according to the State Department- some of these companies are no longer in business but remain on the list):

I also suggested that the United States provide clarity on the types of business to business engagements acceptable within the confines of ZIDERA. It is important that our small businesses have a fair chance of getting access to credit. If we strengthen the private sector we will grow a stronger middle class and this is very good for democracy and our ability to pull our people out of poverty. I also asked that the United States support efforts by Zimbabweans asking for debt relief from international funding agencies including the World Bank and IMF.  Such efforts will bring much needed relief to millions of Zimbabweans, especially farmers, who could increase food production if they have access to credit. Extending credit to startups can allow business owners like Simbarashe Mhuriro, 32, founder and Managing Director a renewable energy development company to  employ more people thereby providing sustainable solutions to poverty.

Zimbabwe does not have a shortage of bright ideas that can get our country moving forward. Consider this- the founders of Uber were inspired by the Zimbabwean experience. The idea of a billion-dollar industry came from Zimbabwe – imagine that. How many Zimbabweans with great ideas do you know?  My aunt was gifted a beautiful piece of cloth for her daughters roora. The material was then shipped to the U.S. for her to have a dress made. She was not aware that she would have to spend $250 on a tailor-made dress. She wanted to honor her son in law and so begrudgingly she parted with this money. She looks great. I know that her younger sister who was once a seamstress for Adams – that uniform company would have been able to make the same dress for cheaper.  If our manufacturing was back up to standard we would be exporting beautiful dresses, we have the cotton, we have the resolve and more importantly we have the ideas. Our main limitation is access to credit. I think most of us agree on this.

The problematic part of the statement:

Sanctions that target individuals. I believe this is what has upset most people. I said:

“With regards to sanctions that target particular individuals the onus is on those listed to prove to Zimbabweans and the global community that they are now committed to democracy.  The majority of those listed have committed horrible crimes against their fellow citizens and it would be a bigger injustice to those harmed to remove them from the sanctions list before a thorough investigation has been conducted. Zimbabwe cannot have economic growth that is divorced from addressing human rights challenges. Robert Mugabe’s exit from politics is not enough to absolve individuals from crimes.”

In preparing this statement I spent a lot of time looking over the list of individuals under sanctions. Many of them are government officials, many of them are individuals that most Zimbabweans fear or continued to fear until recently. The question for most people is this- how can our government engage if our officials cannot travel. Let me answer this in a few ways

We have many talented people within the government who can represent us at various events who are not listed on sanctions. Many. In fact, in the past when organizations have asked for Zimbabwean reps to attend meetings abroad it was our government that denied them permission to travel.

It was explained to me that those under sanctions have done one or more of the following.

I do not know if they are guilty or innocent but I do know for sure that as violence escalated in the period after 2000 their names were associated with some of that violence. As I looked over the names I found it curious that some people whom I did not think had been active politically were listed like spouses of politicians – let’s call her Tendai. A simple google search reminded me that back in 2007 she assaulted Morgan Tsvangirai terribly, in addition to physical abuse she called him a dog and had many choice words for MDC activists. She never apologized nor did she face justice. May I kindly suggest this article for your reading http://allafrica.com/stories/200708020781.html. I think we would be remise to advocate for people who have not yet advocated for the weak, the vulnerable and those who have suffered great injustice. I do not think that their inability to go and shop abroad is in anyway an injustice to Zimbabwean development.

I believe that everyone is redeemable. I just think that those who have caused Zimbabweans great pain should apologize to Zimbabweans, to millions who were violently displaced during Murambatsvina, to black farm workers who suddenly found themselves without an income and in more extreme cases a home, to the people who lost limbs and loved ones after the 2008 elections.

Chipo testifies at the U.S. Subcommittee on Africa Hearing ” Zimbabwe After Mugabe” 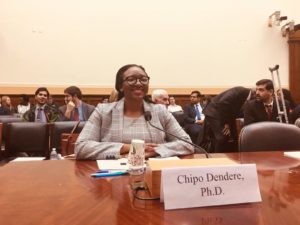 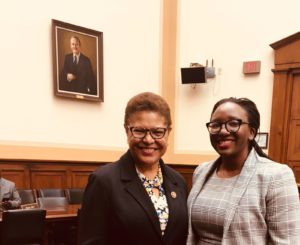