WHO IS TAKING MY MONEY -PAYCHECK WOES?

This should have been the first post, but it will likely not draw much traffic, so it is not the first post. When I received my first paycheck in college, I was so disappointed by how little  I was making. I had worked for TEN HOURS! But the paycheck was so small. Who was this other person taking my money?

I was away from home and very new in America. I had no one to explain my first pay stub to be me. I am sure many of you have had this same confusion. In this very short post, I attempt to break down the pay stub. This will help make other things clearer as we move forward. Please forgive me – I am a teacher and tend to over-explain. Ignore what is not helpful. (But students do not ignore me in class- everything I say is IMPORTANT! LOL)

How much do I make? Whenever you signed your contract there was a number on there. The figure is likely what made you choose that job over others. Chipo has landed her first job after college and she will be making $60 000 a year. Chipo will likely divide that amount by 12 to get a ballpark monthly salary

Chipo will be very happy with this number. She will assume that all her expenses will be met but she is WRONG. 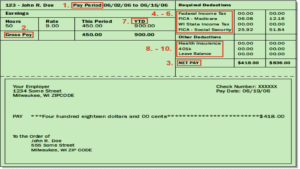 This is for the benefit of Generation Z who have probably never seen a physical paycheck. I also know that some of my millennial friends in Zimbabwe have never had a job and therefore they have never seen a paycheck either.

The image above is from the igrad their page has a lot of good financial resources.

What is taken out before you get your actual paycheck

You CAN not opt out of these deductions. Everyone has to pay for them. These are the monies that keep a country running and this also the reason that you should vote or engage in politics. From these standard deductions, your local and federal government pays employees, fixes roads, provides health care (or not) and education. The government can also loot and by themselves fancy cars at your expense. The explanation below is based on a U.S. system, but every country has something similar.

What you pay to the federal gov. There are seven federal tax brackets: 10%, 12%, 22%, 24%, 32%, 35% and 37%. The bracket depends on taxable income and filing status, whether you are filling as a single person or as a married couple filing jointly. I am in the 21% tax bracket which hurts me inside a little.

This varies from state to state. The 2019 tax rate for Massachusetts is 5.1 %. Just google your state and tax rate to find out your rate.

This is rare but some localities have yet another tax. You may want to check this before you choose your next job- usually, it is not much.

This is the federal Insurance Contributions Act, this is money taken out of your paycheck to fund programs like social security and Medicare. You really must pay attention to politics

There is a 1.45% tax on gross income for everyone to cover Medicare which goes towards health care for the elderly and disabled.

The UK system is amazing -I just learned that after 65 everyone gets a nice pension. I am sure there are plenty of issues there too. South Africa may have something similar.

Other deductions! I know it feels like it never ends – but the next set of deductions are a little more fun. They reduce your tax bill which is a nice bonus

More on this later – most companies offer various retirement options. Some offer a safe harbor contribution where you do not need to add anything in to get something. I just spoke to a friend who works for a university that REQUIRES all full-time people to put in 5% and they put in 9%. My university is wonderful. They will put in 9% whether or not I put in anything. They will also match up to 3% of my contributions which is great so each paycheck I have 15% going towards retirement which is really good.

This is a flexible spending health care plan. For example, this last year I set aside $500 for any co-pays (what you pay at the doctor’s office), I also use it for acupuncture (some policies allow), herbal tea, birth control (including condoms – seriously save tax on condoms). There is a lot you can do with it and in some cases, it rolls over. I also bought some sweet eyeglasses. Do you like my glasses? I need at least 2 pairs because every morning it is Tom and Jerry to find them.

Since Obamacare passed health insurance is now mandatory. Your employer puts in a portion and you do the same. More on this later but worth to mention that my husband and I found it cheaper to be on separate plans. I pay $118/month for my semi-comprehensive and my employer pays in $400. It is expensive but as I explained earlier it is worth it.

SOME ACRONYMS AND KEYWORDS

FM – FEDERAL (M for Married and S for Single)

MA- Massachusetts for me so your State for you

WASHINGTON – U.S. Sens. Jeff Flake (R-Ariz.) and Chris Coons (D-Del.), both members of the Senate Foreign Relations Committee, today introduced a bill to lay the framework for U.S. relations with the new government in Zimbabwe. This legislation updates the Zimbabwe Democracy and Economic Recovery Act of 2001 and sets forth the steps Zimbabwe needs to take to have sanctions on its country lifted.

“President Mnangagwa has signaled his intent to bring about change in Zimbabwe. His words need to be followed by concrete actions,” said Flake. “This measure outlines steps that, if taken, would go a long way to demonstrate that President Mnangagwa is earnest in his desire to bring about long-overdue change for the people of Zimbabwe, who suffered under authoritarian rule for far too long.”

“After 37 years of suffering under the repressive rule of Robert Mugabe, the people of Zimbabwe should be excited about the possibility of a brighter future.  To ensure conditions throughout the country improve, the international community should insist on concrete actions from the new government of Zimbabwe before lifting sanctions and renewing investment in the country. This bill is intended to outline the U.S. Senate’s expectations of the steps President Mnangagwa and other leaders should take,” said Coons. “We look forward to visiting Zimbabwe, meeting with its top officials, and assessing the steps they are taking to hold free, fair, and credible elections as well as to advance broader economic and political reforms to improve the lives of all the citizens of Zimbabwe.”

To view a PDF of the bill, click here.

Summary of the Bill and conditions for lifting sanctions:

‘‘(A) Establishment and public release, without cost, in both paper and digital formats, of a biometric voter registration roll that is endorsed by all registered political parties.

‘‘(B) An independent electoral management body is selected, the members of which should be nominated by all political parties represented in the parliament of Zimbabwe, and permitted to entirely carry out the functions as- signed to it in section 239 of Zimbabwe’s 2013 constitution in an entirely independent manner.

‘‘(C) The Defense Forces of Zimbabwe are neither permitted to actively participate in campaigning for any candidate nor to intimidate voters, and must verifiably and credibly uphold their constitutionally mandated duty to respect the fundamental rights and freedoms of all per- sons and be non-partisan in character.

‘‘(D) International observers, including from the United States, the African Union, the Southern African Development Community, and the European Union are permitted to observe the entire electoral process, both prior to, on, and following voting day, including by monitoring polling stations and counting centers, and are able to independently operate in a manner enabling them to access and analyze vote tallying, tabulation, and the transmission and content of voting results.

(E) Candidates are allowed free and full access to state media, which must afford equal time and coverage to all registered parties, in an impartial manner, and must be able to campaign in an environment that is free from intimidation and violence.

‘‘(F) Civil society organizations must freely  and independently be able to carry out voter and civic education, and to monitor the entire electoral process, including by observing, recording, and transmitting public-posted or announced voting results, including at the ward, constituency, and all higher levels of the vote tallying process, including through the conduct of one or more parallel vote tabulation exercises.’’;

‘‘(3) PRESIDENTIAL ELECTION. —Zimbabwe has held an election that is widely accepted as free, fair, and credible by independent international and domestic civil society monitors, and the president-elect is free to assume the duties of the office.

‘‘(5) UPHOLDING THE CONSTITUTION. —The Secretary of State has certified that all elements of the Constitution, including devolution, are being implemented.

‘‘(6) ECONOMIC REFORMS. —The Government of Zimbabwe has demonstrated a sustained commitment to reforming Zimbabwe’s economy in ways that

will promote economic growth, address unemploy- ment and underdevelopment, and restore livelihoods. ‘‘(7) DIAMOND REVENUES.—The Secretary of State has certified that a transparent and credible accounting for all diamond revenues since 2000 has

graph (2) of this subsection, by striking ‘‘consistent with’’ and all that follows through ‘‘September 1998’’.

Section 5(a)(2) of the Zimbabwe Democracy and Economic Recovery Act of 2001 is amended by striking ‘‘, including the payment of costs’’ and all that follows through ‘‘thereto’’.
SEC. 8. INCLUSION OF AUSTRALIA IN CONSULTATIONS

Section 6 of the Zimbabwe Democracy and Economic Recovery Act of 2001 is amended by inserting ‘‘Australia, and the United Kingdom’’ after ‘‘Canada,’’.
SEC. 9. SENSE OF CONGRESS ON PAST ATROCITIES AND

(1) unify the people of Zimbabwe by—
(A) acknowledging that human rights have been abused, including during the urban land clearances of Operation Murambatsvina, and the violence perpetrated in the wake of the 2008 election against the opposition and citizens of Zimbabwe;
(B) undertaking a genuine process of national reconciliation up to and including acknowledging and apologizing for atrocities in Matabeleland (Gukurahundi); and

(C) taking steps to offer redress or compensation to victims of abuses identified in sub- paragraphs (A) and (B), in a manner recommended by the Zimbabwe Human Rights Commission and the National Peace and Reconciliation Commission; and

(2) order an immediate inquiry into the disappearance of prominent human rights activists, including Patrick Nabanyama, Itai Dzamara, and Paul Chizuze.

SEC. 10. SENSE OF CONGRESS ON ENFORCEMENT OF SADC TRIBUNAL RULINGS.

It is the sense of Congress that the Government of Zimbabwe and the Southern African Development Community (SADC) should enforce the SADC tribunal rulings from 2007 to 2010, including 18 disputes involving employment, commercial, and human rights cases sur- rounding dispossessed Zimbabwean commercial farmers and agricultural companies.

SEC. 11. SENSE OF CONGRESS ON STEPS THAT MIGHT IN- CREASE POSSIBILITY OF INCREASED TIES.

It is the sense of Congress that the United States Government would be more optimistic about the possibility for increased ties with Zimbabwe, including in the areas of trade and investment, if—

(2) takes concrete, tangible steps towards—
(A) good governance, including respect for opposition, rule of law, and human rights; and (B) economic reforms such as respect for contracts and private property rights.