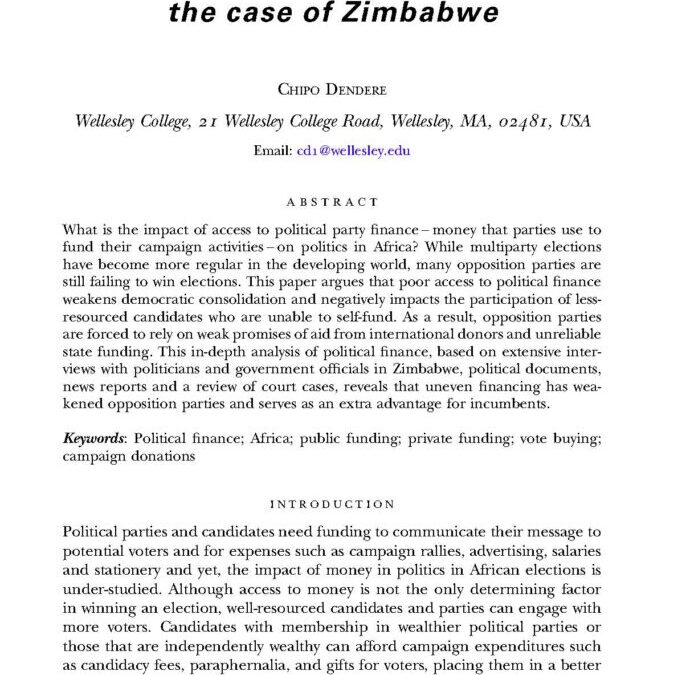 Financing political parties in Africa: the case of Zimbabwe

What is the impact of access to political party finance – money that parties use to fund their campaign activities – on politics in Africa? While multiparty elections have become more regular in the developing world, many opposition parties are still failing to win elections. This paper argues that poor access to political finance weakens democratic consolidation and negatively impacts the participation of less-resourced candidates who are unable to self-fund. As a result, opposition parties are forced to rely on weak promises of aid from international donors and unreliable state funding. This in-depth analysis of political finance, based on extensive interviews with politicians and government officials in Zimbabwe, political documents, news reports, and a review of court cases, reveals that uneven financing has weakened opposition parties and serves as an extra advantage for incumbents.

In a highly anticipated reshuffling of cabinet appointments last week, Zimbabwe’s president, Robert Mugabe, created a new ministry of “Cyber Security, Threat Detection and Mitigation,” to be led by former finance minister Patrick Chinamasa. The government claims the ministry was created because of growing abuse of social media, including cyberbullying.

Towns and cities used to be safe MDC strongholds. Not anymore.

As Zimbabwe heads for elections in 2018, all the economic warning signs are there for the ruling party. Under the ZANU-PF, the economy has gone into rapid decline and it’s possible that by the time the polls are held, the new currency of bond notes will be highly inflated.

The painful reality of Zimbabwe’s 2018 election: A personal story

A couple of weeks ago I posted a picture that has been going viral online. The person portrayed in the picture wrote to me and asked me to take it down in part because it was also of their late family member. I took it down and shared of my own loss. Eight years ago we lost my sister who had just turned 21. She was the most beautiful person I have ever known. She had the smile that lit up the room. She was only 6 months younger than me but grew up thinking of me as her invincible big sister.

Elections are a Numbers Game

Elections are a numbers game. They are a lot of things but they are primarily about winning the most votes. Zimbabwe is headed towards yet another contentious election in 2018. The economy is in a free fall but ZANU PF stands a chance to win again if the opposition does not come together soon.

Let’s Get Women To Govern in New Government

Zimbabwe and its people have been on an emotional roller coaster these past few months with a multitude of unanswered questions raising a swell of controlled panic and fear.

Would 2008 repeat itself? Would Morgan Tsvangirai finally make it to the highest post in the land? Would Robert Mugabe step aside? Could ZANU-PF win freely and fairly, and what would this mean for the country?